Vol.357 FROM THE EDITOR
Examining the state of automobile production which has the greatest impact on the domestic aluminum trend, production of passenger vehicles in June was 438,000 units. In spite of a year-on-year decline of 36.5%, a significant turnaround was seen with a 74.6% growth from the previous month.  The 8 major Japanese automobile manufacturers including Toyota declared a recovery from the large-scale decline in production due to Covid-19 and a return to normal production.  However, the Covid-19 situation has not been contained neither in Japan nor abroad.  Therefore, we cannot be too optimistic about the recovery in passenger vehicle demand including exports.
Regarding the rate of domestic Covid-19 infections as of August 10, the total number of infections in Japan is just over 50,000 cases and the death rate is a little over 1,000 cases.  These figures for both infections and death are low in comparison to western countries.  However, the figures which decreased for a time during May and June has been soaring from the latter half of July and it appears that we are on the verge of a 2nd wave.  Many are critical of the government’s inconsistent response to this crisis and, it can be said that in Japan, individuals are endeavoring to stop the infection by self-imposed restrictions and preventive measures.

Vol.356 FROM THE EDITOR
The downward trend in Japan’s aluminum products in May 2020 reported in this volume surpassed the decline recorded in April.  In particular, the slump in automotive-related demand is notable and shipments of rolled aluminum products to the automotive sector has dropped to roughly half of the previous year’s level.
With regard to the spread of Covid-19 in Japan, on one hand there is undeniable apprehension toward a second wave in some parts of the country such as the Tokyo area, but on the other hand, economic activities are on gradually being resumed.  Toyota has announced that they will aim to achieve 90% of their average year’s domestic automobile production plan in September, thus raising expectations for recovery in the automotive sector.

Vol.355 FROM THE EDITOR
From the Editor
The “state of emergency” issued by the Japanese government on April 7 to address COVID-19 was lifted throughout Japan on May 25.  While implementing voluntary restrictions henceforth, the nation is preparing for the 2nd and 3rd waves.  In accordance with this direction, economic activities which have been stagnating are resuming at last.
In this volume, the demand and supply trends of aluminum products in April is reported.  According to the April data, decline in automotive-related demand is apparent.
The Ministry of Economy, Trade and Industry announced on June 12 that domestic production of passenger vehicles was 438,770 units, plummeting 46.1% year on year and drastically falling 39.0% from a month earlier.
As reported in a separate item, demand for rolled and extruded products and secondary aluminum alloys for the automotive sector has dropped drastically.
We are keenly anticipating that economic activities are on the road to recovery after hitting the bottom during the April-June quarter.  However, since global trends also have a great impact on us, it is difficult to ascertain future prospects.   In Japan, the most likely outlook at the moment is “economic improvement becoming apparent after fall onward at the earliest.”

Vol.354 FROM THE EDITOR
In this volume, demand trends of aluminum products in Japan for March and the January-March 2020 quarter are reported, reaffirming that overall sluggishness is continuing.
It is difficult to establish at this stage to what degree Covid-19 is affecting the market.  However, statistics from April onward will clearly reveal its effects particularly on the automotive and related sectors.  The expectation that Japan’s GDP growth rate for the April-June 2020 quarter will shrink substantially by more than 20% seems now to be unavoidable.
Restriction measures such as lockdown to prevent the spread of Covid-19 are gradually being eased globally from May.  However, there are possibilities of 2nd and 3rd waves, thereby requiring discernment and cautious measures in relaxing the restrictions.
As reported in the previous month’s volume, increase in imports from China of rolled products which are key aluminum products is notable.  While shipments to the domestic market from rolling mills in Japan are on a downward trend with 1,076,000 tons in 2017, 1,025,000 tons in 2018 and 979,000 tons in 2019, a significant increase in imports from China and other countries can be observed as shown in the figure below.  If domestic demand is regarded as shipments to the domestic market as well as imports, the ratio of imported rolled products in domestic demand was 7.8% in 2017, 9.5% in 2018 and 12.7% in 2019, indicating a rapid increase.
We will closely observe future trends.

On the other hand, the retaliatory tariffs imposed by US and China are reaching their limit and it is obvious that nothing can be gained by either party from these policies.  We strongly look forward for direction to be changed urgently so that a new cooperative structure may be established.
Vol.345 FROM THE EDITOR
In this volume, our report focuses on the supply and demand trends of aluminum semis and foil  in the first half of 2019 (January to June).  Stagnation in demand can be observed in a wide range of sectors.  Shipments have seen a two-year consecutive decline.  Particularly, the steep downturn from this spring onward can be attributed to the impact of increasing trade friction between US and China.
A typical example also reported in a separate section is the plunge in the shipments of aluminum foils for condensers used extensively in electrical parts.  The downward trend which began in February has accelerated to a level of approximately 40% year-on-year in May and June.
In the previous volume, expectation toward mutual concessions aimed at cooperation between US and China was referred to.  However, on August 20, US declared that it would impose an additional tariff of 10% to $300 billion worth of imported products from China.  In addition, on August 5, US also designated China as a currency manipulator for the first time in 25 years, thereby hammering out the hard-line policy of the Trump Administration.  Unfortunately, further confusion and chaos in the market seem unavoidable.
Regarding the above-mentioned additional tariff on China by the US, an announcement was made on August 13 that the imposition for specific consumer goods items such as smartphones, laptops and toys will be delayed until December 15.  It is anticipated that this may provide some leeway for bilateral negotiations.
Vol.344 FROM THE EDITOR
The main focus of this report is the production and shipment status of aluminum products in Japan for May.  However, as shown in a separate section, the overall aluminum demand with the exception of rolled products for automobiles is on a downward trend.  In particular, export of parts to China affected by the US-China trade friction and equipment-related export continues to decline.
Regarding rolled and extruded products, sluggishness in shipments to the machinery sector was prominent.  With regard to aluminum foil, a significant 39% year-on-year decrease in shipments to the condenser sub-sector was outstanding.
At the US-China meeting during the G20 Summit in Osaka held at the end of June, a sharp rise in additional tariffs for imports by the US was not imposed for the time being.  However, the matter will be carried over to future discussions with future prospects remaining uncertain.
It is thought that the 10-day Golden Week Holiday due to the abdication and enthronement of the Emperor of Japan in May affected the economic activity in no small way.  We are awaiting the figures for June.
Vol.343 FROM THE EDITOR
According to the Trade Statistics of Japan, Japan’s exports to China in April 2019 fell 6.3% from the previous year, marking a 2-month consecutive decline.  Of that figure, electronic components including semiconductors constituted a large drop of 21.5%, while semiconductor manufacturing devices fell considerably by 41%. Decrease in other areas such as automotive parts and metal processing machinery was also prominent. Meanwhile, imports from China increased by 6.4%.
The status of imports of rolled aluminum products from China in April is reported in a separate item of this Volume and the trend of rolled aluminum products in general is similar to the above.  The impact of the US-China trade friction has led to a downward trend of exports from Japan to various parts of Asia.  Feelings of uncertainty toward the global political and economic climate are spreading.  Therefore, we are in keen expectation that discussions among the major countries in the forthcoming G20 Summit to be held in Osaka, Japan on June 28 and 29 will proceed in the direction of mutual cooperation and that global trade order will be restored.
Vol.342 FROM THE EDITOR
As reported in the previous Volume, the Japanese economy, impacted by the deceleration of the Chinese economy, is on a downward turn and aluminum demand trends are no exception.
Amid such a climate, in the US-China trade negotiations in May, improvements in bilateral trade friction was made, resulting in slightly heightened expectations for the future of the global economy.  However, on May 5th, prior to the negotiations,  President Trump imposed additional tariffs on Chinese exports to the US.  In response,  China declared that it would impose retaliatory tariffs on US exports to China.  This sudden turn of events has led to growing uncertainty toward the global economy.  While bilateral negotiations are continuing as of the third week of May, an immediate recovery seems unlikely.
On the other hand, as we have reported, Japan’s aluminum demand at the present time is supported solely by the solid growth of shipments to the automotive sector.  Japan’s domestic auto production is greatly dependent on exports to the US.  Trade balance between US and Japan with focus on automobiles is the constant issue pointed out by President Trump.  This issue along with the future of China are matters of concern for Japan in the days and months to come. 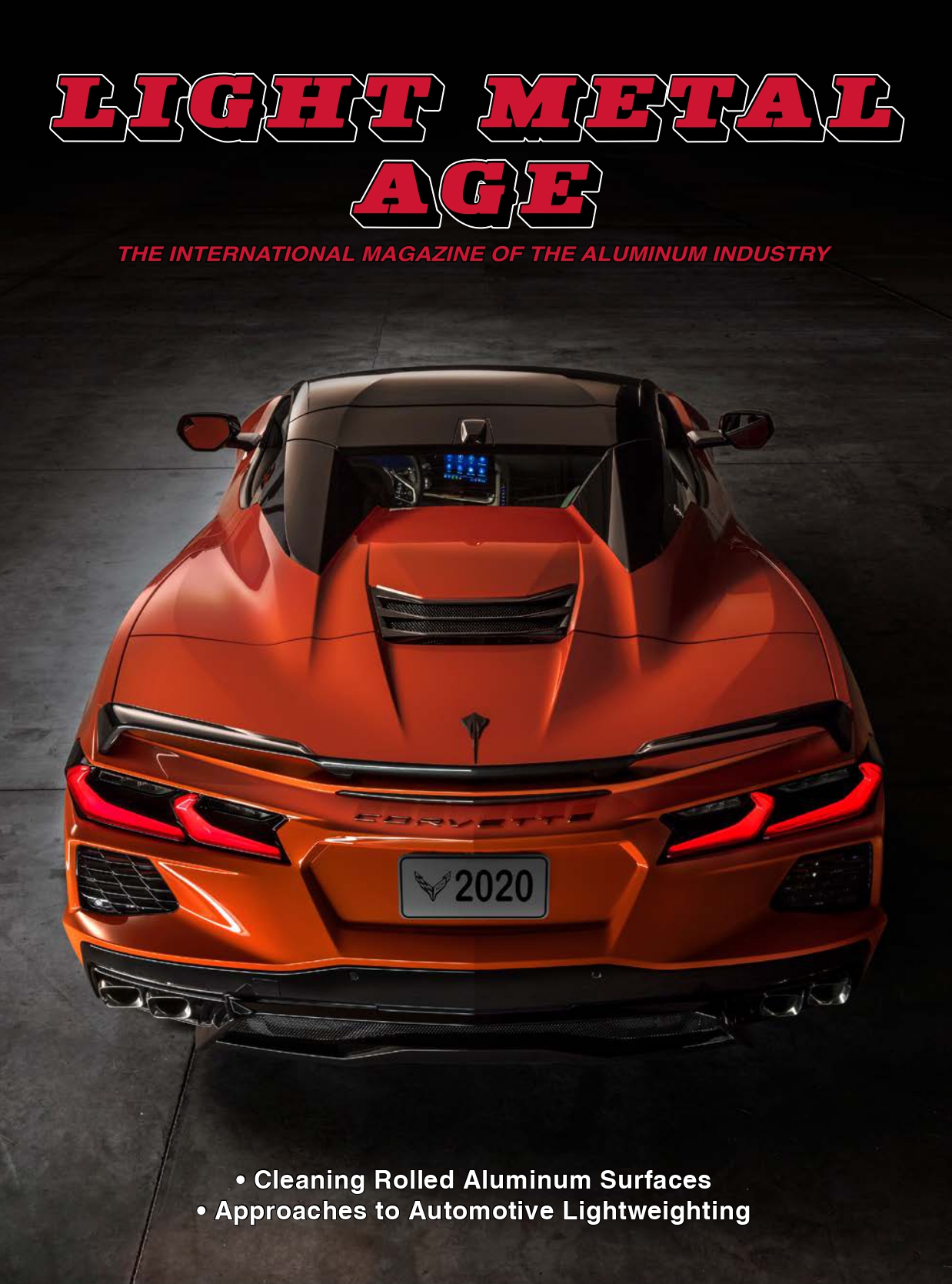 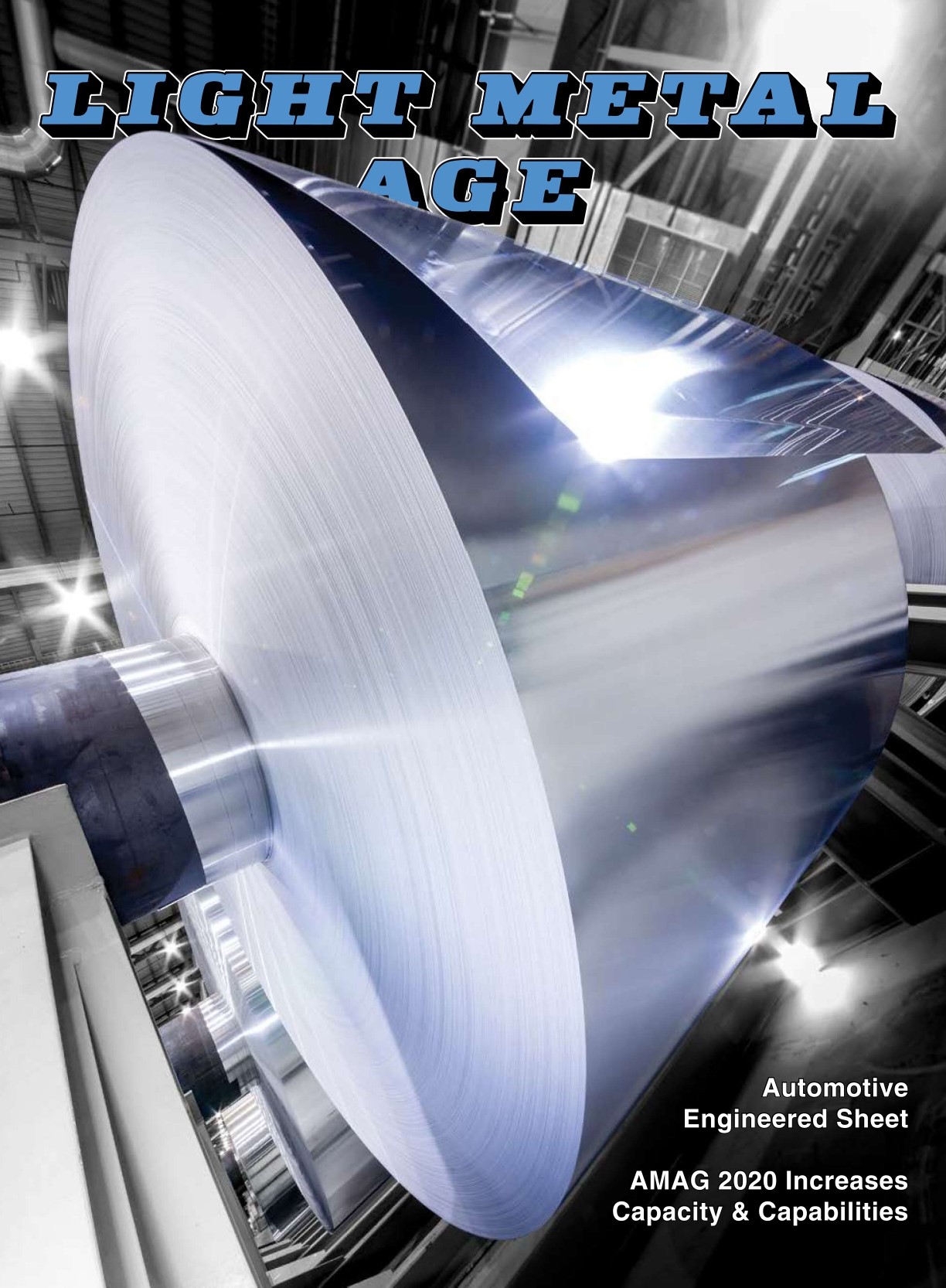 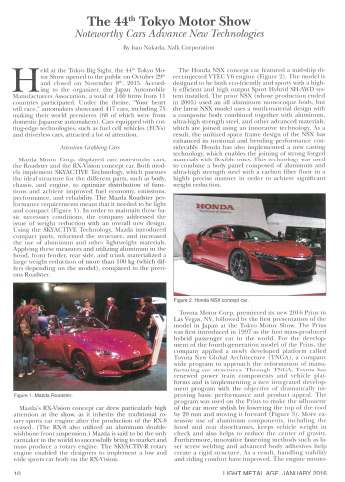 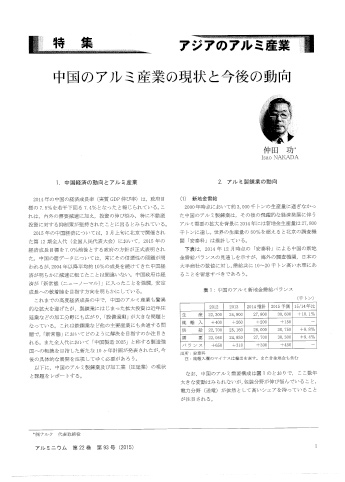 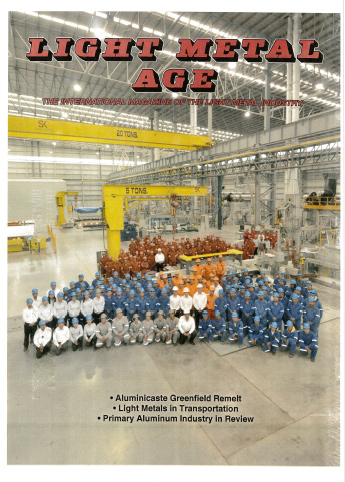 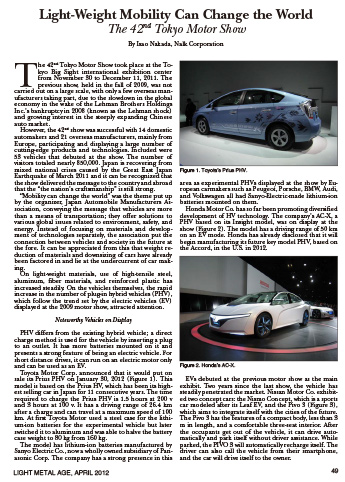 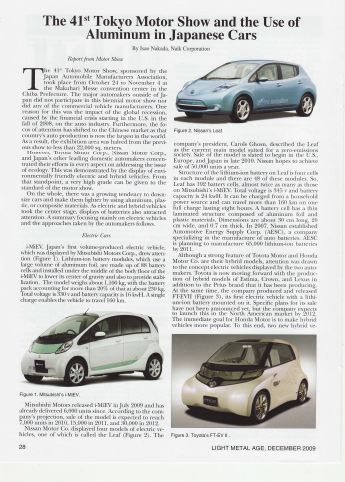 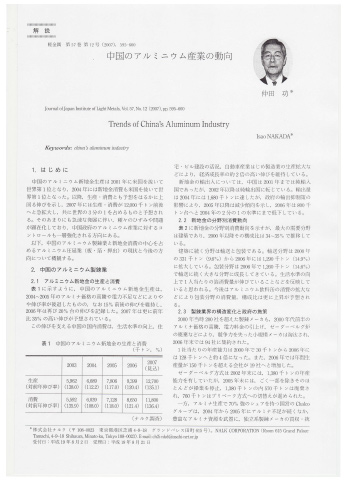 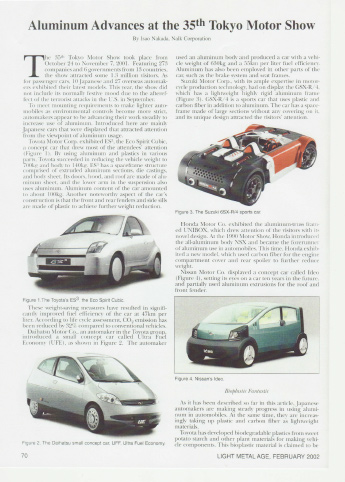 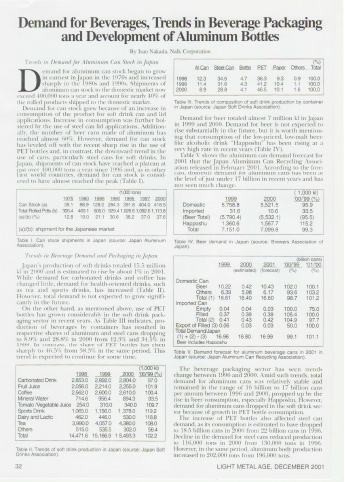